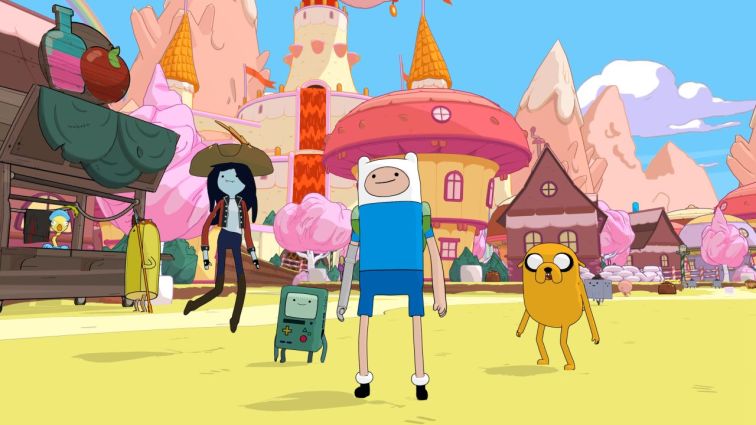 I have been playing recently, Adventure Time Pirates of The Enchiridion on the Nintendo Switch. I am huge Adventure Time fan myself and I couldn’t wait to play this game as its open world, which compared to others which were quiet liner, and also you get to see more of the Land of Ooo.

It starts with the main characters Finn and Jake, talking and going to sleep then waking up to find everywhere had been flooded and the only way to get around is on the boat Jeff. I think the graphics have translated well into the 3D and still keeping the cartoon style we have known to love from the game. Now the gameplay is very much and open world RPG game, where you level up and also have to level the character up through money you find or earn after battles (like Pokemon). Now the levelling up system is okay don’t get me wrong but I find it strange you level up, but it doesn’t really have any impact on attack etc because you still have to level up attack, defence and special attack all yourself, when you reach another level like 6 it allows you able to upgrade more, but you still have to do it yourself, which I find quiet different and I am not sure I like it, as if you level up to expect that it levels everything else up as well.

The gameplay is good, fighting style is great and its fun battling as you can companions along the way, and get to see their fighting styles and special attacks and its like Pokemon, where you take turns use items to power up or heal etc. Only issue I have is that loading times, are quiet long especially when you are defeated, it takes 3/4 mins to load up again and when you are going into a fight loading does take a while not as long as been defeated, but still when you want to keep the good mood going, you do get a bit fed up with the waiting. You don’t just fight, you also have an interrogation parts as well, which at first I enjoyed as you can go good cop/ bad cop and if you get through it and green thumbs up you get the information, but you press the wrong one you can end up in a fight which is great adds another element to it, but again it does get harder as you go on and you can try and try again, but the dialogue is exactly the same so once you have heard and fail you get to hear it all again.

The game itself is fun and isn’t very long its one you pick and put down and there also side quests. Its definitely for the fans and I would recommend this game but I would’t take it to seriously. I would 6/10 it has fun factor, but loading times do get boring and make you fed up quickly.