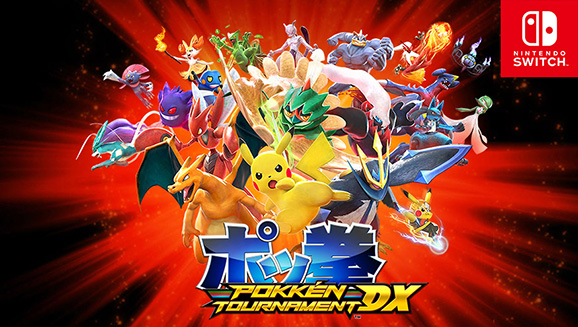 A very exciting fighting game with pokemon introduced into the mix makes it and even better fluid fighting game.I am a big pokemon fan so I was really excited to play this game I did have the wii u version but never had the time to play but now I have a switch I have been able to give it my full attention and I wasn’t disappointed.
Pokkén Tournament takes a lot of what we know from old fighting gaming favorites and sticks them into a blender, delivering a unique take on both Pokémon and on fighting games in general.
I love Pokemon I am huge fan since it game out all those years ago on gameboy so I was really happy we would be getting an update full 3D pokemon characters to fight with and play as, the graphics in the game are stunning and captures the real stunning colours of the environments but also the Pokemon themselves and look bigger and better than ever. I was so impressed with how well the pokemon look in this game.
The artistic style just feels so right and at home in the Pokémon universe, while also lending cutting edge graphics to the visuals to make the action a very good fit for a fighting game. The sounds and music just fits so well with the graphics as well, with new takes on Pokémon soundtrack classics alongside original high-energy compositions. Pokémon games always have quality music, and developer Bandai Namco has made sure that Pokkén Tournament does not tarnish that legacy, already created by the Pokemon series.
The fighting game system is easy to get use to and there are tutorials at the beginning to get the basics down which button is punch etc and then it’s up to you either to advance your skills or button bash which this game works for both type of player, but this game isn’t boring at all and it is all about strategy and choosing the main pokemon and the side assistant pokemon you get to use help you to defeat your opponent in battle and they have unique abilities and attacks that have a real impact on the game, which again this is impressive as it can you give a massive edge in a fight.
There are a variety of characters to play as, you get to play Shadow Mewtwo and Mewtwo straight away which is awesome as you get to experience what they can do , but you can play as classics pikachu which is who I played as and found pikachu to be amazing to play as, because the character is quick and has very fluid movements to the gameplay which is a big plus to me , I am still playing this game getting experience on other characters, to gain experience with others not just your favourite, there is a daily goal quest where you are given a specific pokemon and assist Pokemon as well to defeat your opponent you need to adapt each time giving you as a player a chance to get to know the other characters and how they move etc.
However, the daily quest mission are fun and again you get the feel of the different characters you get rewards from completing this quests in the form of skill points which really doesn’t have that much use for the player. But you can level up your Pokemon itself either having more attack points etc like you would level up pokemon in the traditional games.
The new three-on-three battles are awesome because they definitely feel more like actual trainer battles in which your Pokémon faint, forcing you to throw out a new one to continue the fight and again continuing the flow and fluid play that this game offers.
Pokkén Tournament DX serves as a very good edition of Nintendo’s fighting games and also in the pokemon series, and it fits well on the Switch aside from choppy split-screen multiplayer, but with graphics not lost when handheld or docked it’s a visually stunning experience. It contains five new characters from the Wii u and it has a brand new three-on-three mode which are noteworthy additions to game, though the new challenge mode doesn’t live up to its name. I throughly enjoy playing this game and will continue to do so as a fighter but also and avid Pokemon fan.
Overall, Pokken Tournament DX plays brilliantly on the Nintendo Switch apart from in split-screen co-op mode . It’s a definitely a great fighter game to take on the go and highly addictive. Pokkén Tournament takes pieces from many fighting favorites and successfully blends them.